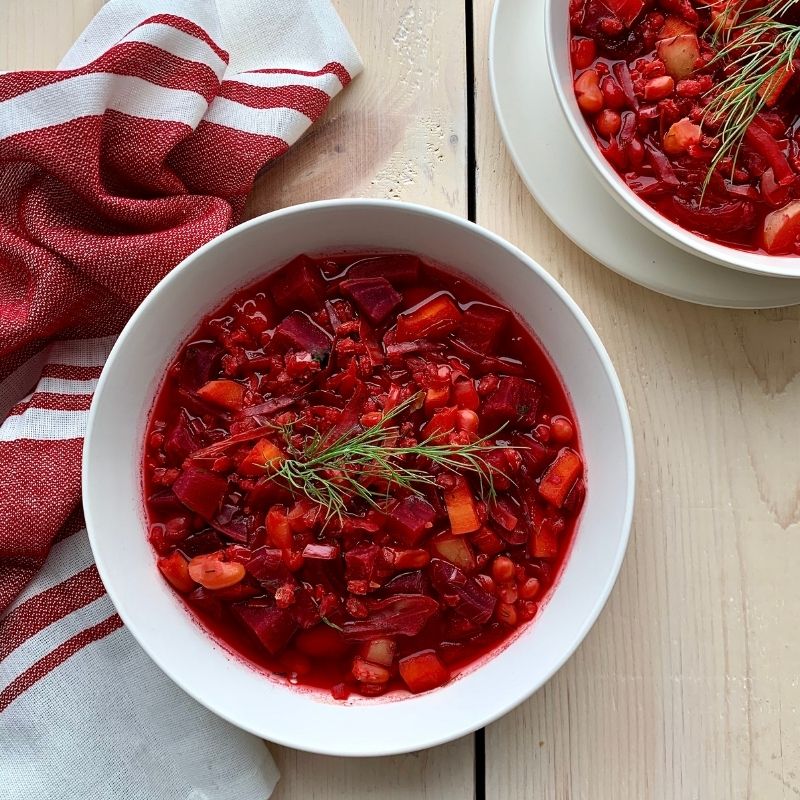 Soup season is here! (Is anyone else excited?!) I re-invented a standard dish from my childhood last winter into this hearty vegan beet borscht and I’m excited to whip it out again. Growing up in a Russian Mennonite family, Beet Borscht often made an appearance at Sunday Lunch at my Oma’s house. My Oma expressed love and joy in many ways, and creating delicious food was definitely chief among them.

When I first became a vegetarian, I’m pretty sure she didn’t quite understand why anyone would choose not to eat meat (given that she had grown up in a world where starvation was a devastating reality).  Nonetheless, she would painstakingly pick out all the pieces of meat from my bowl of borscht soup so that I could still eat it.  She didn’t fully realize that picking meat out of a soup did not quite make the soup vegetarian.  However, the gesture was so thoughtful, I would often eat the soup anyway.

Fast forward 20 years and I decided to actually “vegan-ize” her soup. I took out all the beef, and swapped in pearl barley and white kidney beans. I then added all the usuals: cabbage, carrots, beets, and lots of tasty dill.

This hearty vegan beet borscht tastes delicious and also provides nutrient-rich foods to nourish you and your family this winter. (And I think it would be Oma-approved).

Beets:  Contain dietary nitrates, which convert to nitric oxide in the body and can help lower blood pressure. The nitric oxide in beets can also improve athletic performance. Beets contain a pigment called betalain, which has anti-inflammatory properties.

Pearl barley: Contains a high amount of a soluble fibre, called beta-glucan. Beta-glucan can help lower cholesterol levels and reduce risk of heart disease and certain cancers. It is also a prebiotic fibre that can help with digestive health.

Looking for other tasty soups this soup season? Check out our delicious Plant-Powered Lentil Pumpkin soup!

This hearty, tasty vegan soup provides fibre, plant-based protein, and lots of flavour to help nourish and sustain you and your family.